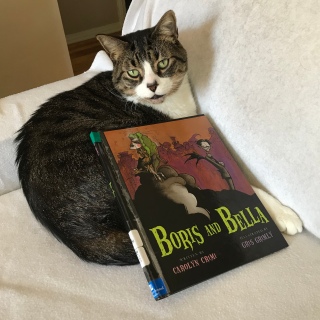 Happy October! I am so excited for the turn of the weather, and all the spookiness that comes along with October. In the spirit of the season, I plan to keep things spooky for my next few posts! I saw this book on display in the library, and it immediately caught my eye– the cover is a bit creepy-chic, and one of the title characters has a great name (coincidentally, my mother also has a dog named Bella to pair with my Boris).

As it turns out, this is not just an eye catching cover with a personal connection in the title– it is a cute story about friendship with a Halloween-ish theme.  Bella Legrossi and Boris Kleanitoff are neighbors, who are not particularly fond of one another. Bella is the messiest monster, and Boris is a neat freak who goes as far as polishing his pythons daily! Neither of them are popular with the other monsters in Booville, which only complicates things when they try to show each other up by throwing competing Halloween parties– which nobody attends because of Boris and Bella’s tiresome personal habits. As often happens in children’s books, Boris and Bella are able to find some common ground: first in their anger about the party everyone attended instead, and second in a shared love of dancing. While neither of these characters give up their ways, they do ease up enough to become friends.

Although the story does feature a Halloween party, this is not exactly a Halloween book. Halloween-ish? Halloween-lite? Despite monstrous characters, the story itself is about the ability to look beyond differences to find friendship in unlikely places. Nonetheless, the monster theme does make this a nice fit for the season. The illustrations are very detailed and compliment the story, with a color scheme that maintains a spooky mood to the setting. There is also some pun-ny humor for those who appreciate that sort of thing, and some really great kid humor– Baggo Bones connects his hipbones to his neckbone just for fun!

Boris’s thoughts: “I hope you’re not trying to suggest that I am persnickety like this other Boris. 1 paw.”