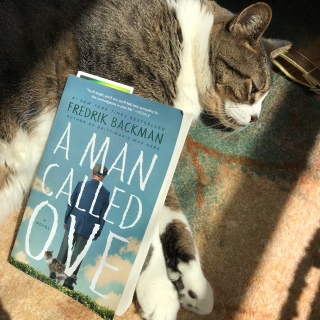 This was my book for The Unread Shelf Project prompt for August: a book voted for you to read by Bookstagram. Since I do not have a large following, I decided that it was easier do this as a poll with two options. It was actually my first ever Instagram poll! I only had 6 participants, but enough to give a slight majority to this grumpy old man. I loved this book, so I am happy that it turned out as it did!

To those around him, Ove appears to be just a cranky old man. They aren’t wrong—he is one of the most cantankerous characters I have ever read. However, as the back cover states, there is more to Ove than meets the eye. Of course there is; we would not have much of a story otherwise. We meet Ove shortly after the death of his wife, Sonja, although this is not entirely clear in the first few chapters. He has been struggling to cope with the loss, as he views Sonja as the bright spot in an otherwise bleak existence. Throughout the novel, we jump back and forth between past and present, allowing us to see how the story of Ove’s youth, and Sonja, has influenced his attitudes: strong principles, irritability, and all. Sonja certainly brought out the best in him, and continues to do so even after her passing. Whenever faced with doing something that is inconvenient, but the right thing to do, he considers what Sonja would say to him when he joins her in the afterlife—whether that decision is about caring for a stray cat or taking in a youth who was kicked out of his home.

The two main themes that stood out here for me were Ove’s ability to find new purpose in life through his connection to others, as well as what Backman calls “time optimism”—the tendency we all have to assume that there will always be enough time with other people, until suddenly that time runs out. It’s a funny concept to think about, because I think it is a characteristic that we all share, to an extent. I know I am guilty of time optimism still, despite having several experiences to call on of time run out. I would like to say that it is something I am working on—and it is—but I think it is something hardwired in us that we may only be able to escape temporarily.

In addition to falling in love with the story of Ove, there were some literary devices the author used here that I really enjoyed. The first, and the most apparent, is the liberal use of ridiculous and hilarious similes. Things like when Ove “nods irritably, like someone squeezing an avocado and finding it overly ripe.” I can see why some readers might think the similes are overdone—but I love it. Second, and a bit subtler, is the change in narration that coincides with Ove’s shifting attitudes. At the beginning of the novel, Ove refers to nearly everyone around him by a nickname, oftentimes a rude one. His new neighbors are the Pregnant One and the Lanky One, and their children are referred to only by their ages. There is a full cast of characters in the neighborhood who have all earned Ove’s contempt. Gradually, as Ove begins to soften toward some of these characters, he begins to refer to them by their proper names; beginning with Parvaneh, the pregnant one who pushes his buttons but also pushes him to be better.

Boris’s thoughts: “He was kind of a jerk to that cat… but I’m not sure I can blame him. I think I relate more to the man than the cat. 3 paws.”