Book: A Series of Unfortunate Events by Lemony Snicket

I realized toward the end of November that I was not quite on track to meet my total book goal by the end of the year. As I often do at that time of year, I looked through my shelves for the shortest books on my to read list, hoping to give myself a little boost to end of the year and start 2020 on a positive note. I ended up settling on a book series that was on my mental to read list, if not my actual shelves: A Series of Unfortunate Events. It had been recommended to me several years ago, and I knew it was available for free from my school’s online library.

This series is aimed at late elementary or middle grade children, but has elements of wit and humor that would be more appreciated by adults. There were several moments that caused me to smirk, but would likely be skimmed over by younger readers. This includes references in characters and actions to other works, as well as some humor in interpretations of vocabulary. For the majority of the series, the youngest Baudelaire, Sunny, talks in baby talk which is interpreted by her siblings. While most of these are straightforward nonsense words, there are a few that include real words or other references that were clearly targeted for adult readers. These are worked in to the style of the story naturally, which perfectly expands the potential for enjoyment across age groups.

Each book works as a stand-alone story, although the later books in the series are more clearly linked together. Any references to events in previous books are given proper explanation at the time, which is nice for continuity. I liked that the stories became increasingly complex throughout the series, but still kept to a consistent style. Although I did enjoy reading these, I have to say that the series is aptly named: all of these books are quite unfortunate. Each one starts with a warning to the reader about the wretched lives of the Baudelaire orphans, suggesting that perhaps it may be a good idea to find something a bit less depressing to read. Although the story lines are brought to a conclusion with each book, and in many ways things work out in favor of the orphans, each “happy ending” is not quite happy. 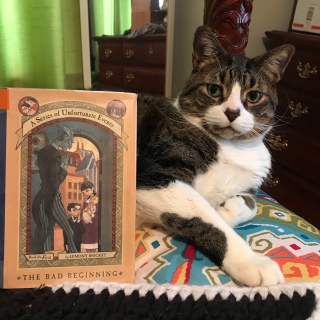 Where else to start, but with the bad beginning? This book sets up the misery in the lives of the Baudelaires, beginning with the death of their parents in a fire. We get an introduction to each of the main players here: Violet, Klaus, and Sunny Baudelaire, with their inventions, books, and teeth to add to their resourcefulness. And then of course our villain, Count Olaf. As their first guardian after the loss of their parents, Olaf makes it clear early on that he is more interested in the children’s inheritance than the children, and hatches his first scheme to get his hands on their fortune by forcing Violet into a marriage. Of course, the children are too clever to let him get away with it. We are just in sight of a happy ending when we get another twist, and Mr. Poe, the banker in charge of their parents’ will, sends them on to their next guardian.

This book sets the stage for the remainder of the series, as well as establishing some stylistic elements that carry throughout. The narrator tells a parallel story, focusing on the Baudelaires, but giving occasionally hints as to his own misery and questionable situation. The book uses some vocabulary that would be somewhat advanced for the target audience of these books, but does a nice job of explaining terms with a bit of humor. These start quite reasonably, but become a bit more grandiose and absurd as the series progresses. I felt this was a solid start for the series, as it left me wanting to know what happens next, but satisfied with the conclusion. 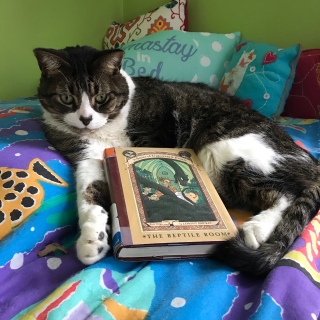 After their experience with their first guardian, the Baudelaires are understandably reluctant to meet their next guardian: their Uncle Monty, a herpetologist whom they have never met. Things go well for a while, with the children’s talents put to good use with Uncle Monty’s collection of pythons, vipers, and other reptiles. For the first time since the death of their parents, they find some happiness in their new home and are excited to accompany Monty on an expedition to search for new reptile species. That is, until Uncle Monty’s new assistant arrives—whom the children immediately recognize as Count Olaf in disguise. Despite their efforts to warn Uncle Monty, Olaf always seems a step ahead in threatening them to keep quiet. He launches another scheme to get their fortune, beginning with murdering Uncle Monty, making the death appear accidental.

This kicks off a theme that remains through most of the series: adults being oblivious to the treachery that is obvious to the Baudelaires. I think this is a theme that resonates with younger readers: adults seem unaware of what it is like to be children, and because the Baudelaire orphans are children, much of what they say is dismissed. This is especially prevalent with Mr. Poe, who begins to use the excuse that the Baudelaires “see Olaf everywhere” after their first traumatic experience, despite the fact each time they claim to see Olaf, they turn out to be correct. 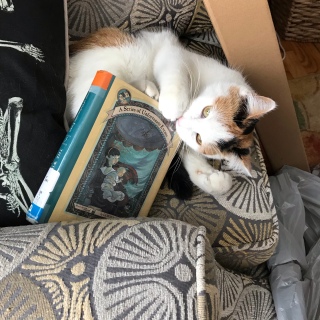 The third book in the series follows the same pattern as the previous, beginning with the Baudelaires on their way to meet a new guardian, Aunt Josephine. This guardian turns out to be another kind, but imperfect, guardian: since the death of her husband, she has become fearful of nearly everything. She is fanatical about grammar, but excited about little else. The children fall into a routine until, as expected, Count Olaf shows up in disguise as a Captain Sham. As usual, their guardian does not initially believe the children, although she does eventually realize Olaf’s plot. The problem, of course, is that she is too afraid to do anything about it.

In this book, we get a clearer glimpse into Klaus’s particular talents: reading and research. When Aunt Josephine discovers Olaf’s plot and flees, she leaves a coded message in the form of a purported suicide note. Klaus recognizes the code from the many grammatical errors included, and uses this information to find where she has hidden herself. As with previous books, we come to our not quite happy ending: Olaf’s plot is foiled, but with the loss of Aunt Josephine and the children are sent on their way to another guardian. 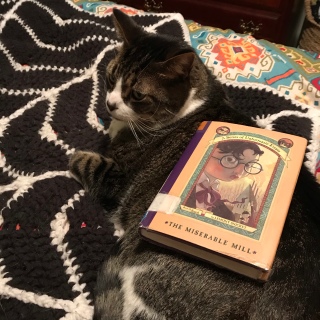 With the miserable mill, there is a slight break from the typical guardian routine. The Baudelaires are sent to a new guardian, who is the owner of the Lucky Smells Lumber Mill. Rather than take an interest in the children, their guardian, Sir, puts them to work at the mill and has them living in the quarters with the other employees. Even without the issues of child labor here, the mill is run in a fashion of borderline slave labor, with the employees paid in coupons rather than money and provided with only one meal per day. As always, Olaf is lurking just around the corner, but this particular plot is a bit more convoluted and relies on several of Olaf’s henchman. The guardian Sir is much more concerned about the smooth operation of his mill than anything else, and with the help of a hypnotist, Olaf attempts to monopolize on their guardian’s ambivalence to the orphans.

One theme that had been introduced in the previous book is continued here: the presence of helpful adults who fall short of expectations. Aunt Josephine had been concerned for the children, but too fearful to act. In The Miserable Mill, the children meet Charles, their guardian’s business partner, who is kind and seems to want the best for them. He offers help when able, and quietly advocates for the children, but is too afraid to speak up too adamantly in their defense. As usual, the children are able to defeat Olaf in his plot with little help from the adults around them, ending the book with the need for a new guardian.