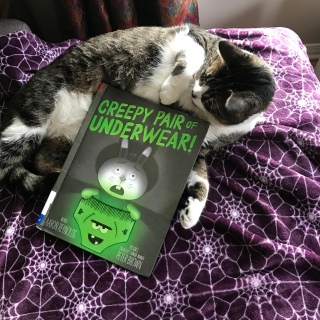 What a perfect mix of fun and spooky! While shopping at the underwear store, Jasper Rabbit convinces his mother that he needs something more than just “plain white”– he needs the cool green underwear in the special display. His mother is worried that they are a little creepy, but he assures her that he’s not a little bunny anymore, and the underwear are not too creepy for a big rabbit. That night, he proudly wears his new underwear to bed. But then, after the lights are out, he realizes they might be a little creepier than he thought: the underwear are giving off a ghoulish green glow that he cannot get out of his head. Jasper stuffs them in the bottom of his hamper and goes back to sleep. Then the next morning… they are back! Jasper makes several attempts to rid himself of the underwear, but they continue to show back up in his drawer. When Jasper finally finds a way to keep the underwear away, he has another realization… he has become accustomed to that gentle green glow, his bedroom is awfully dark without the creepy glowing underwear.

This book is super silly, with just the right amount of spookiness twisted in. There is a nice, creepy aesthetic to the illustrations, all in black and white with dark backgrounds, except for the green glow of the creepy underwear. I can see this one enjoyed by kids off all ages, with an engaging story and ridiculous premise. A story about underwear is going to be funny to kids, and the idea of being haunted by creepy underwear is obviously hysterical to anyone under the age of 10 (and probably a lot of us adults too).

Boris’s thoughts: “Okay, it’s funny… but don’t get any ideas. If you start stringing glowing underwear around the house, I’m leaving. 2 paws.”