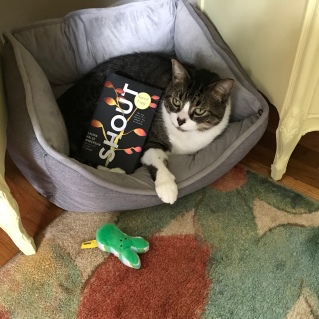 I went to a small high school. There were two English teachers in the school my freshman year, and by the time I graduated that had only increased to three. We had no library, just the small collection of books each teacher had in their classroom. By my junior year, I had read them all. One of the teachers started bringing in books from home for me to read, and that was when I discovered Laurie Halse Anderson. I was so taken with her story and her writing that I bought up her other novels as soon as I saw them, without even taking the time to read the description on the back cover. It was this practice that led me to scoop up her latest book without realizing what it was—which I am considering serendipitous, as I would have likely passed on this incredible work because I thought it was “not my style.”

Shout is a novel-length memoir, told through a series of poems. Although each poem as its own subject, and there is variety in style, they combine to form a loose narrative. I was impressed with how Anderson was able to convey her troubled childhood without judgment. She acknowledges the hardships of her family life, but does not condemn her family nor ask for sympathy. The poems are divided into three sections, labeled simply: One, Two, and Three. One, which covers more than half of the book, deals with her early life into her early writing career, ending with Speak, her first successful novel (and the book that I had originally discovered back in high school). Two gets more involved in life as an author, and as a speaker. Dealing with the unexpected success, but also the controversy surrounding sexual assault and speaking about it in schools. Three was a bit less organized, but had some reflections and other pieces that did not quite fit into the rest narrative.

Overall, I was really impressed with this book. I usually am not a fan of poetry, but something about these poems really drew me in. The story was captivating and I found myself enjoying it much more than I had expected when I started.

Boris’s thoughts: “I think poetry just goes over my head. It was hard enough to learn to read human, how am I supposed to understand this? 2 paws.”