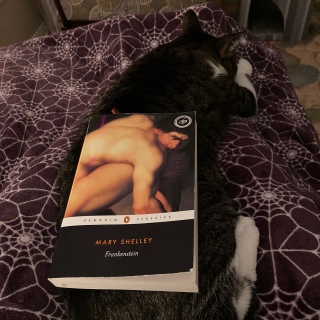 Of course, Boris was right last week: despite the passing of Halloween, it was not the end of the spooky books. I picked this book to read in October for the Unread Shelf Project Prompt: a book you’re secretly afraid of. I was not entirely sure how to apply the “secretly” prompt, since I do not know that I have any books that I am openly afraid of either. I picked this one because it could fit the prompt in two ways: it is a horror story, and it is one that I have been uncertain about starting due to hearing mixed reviews.

My first thoughts as I was reading were that this was not what I was expecting it to be—kind of a silly thought, since I am not really sure what I was expecting. Going in, I only knew the very basics: Frankenstein creates a monster—and Frankenstein is the creator, not the creation. Of course I have seen some pop culture variations on the story, but none in full, so I did not have much to associate with the book itself. After finishing, I would say that the horror aspect was subtler than I had expected. While horror definitely still fits, it is not the action filled, in-your-face type horror.

The “story within a story” framing added an interesting level to the story that I had not anticipated. The novel begins and ends with letters initially unrelated to the main tale, with the story of Frankenstein embedded within them as a story relayed to the letter writer. The initial story contained in the letters follows what I have discovered to be a popular trope from the time period—an adventurer seeking to journey to one of the extremes of the earth, in this case the northern pole. Captain Walton writes to his sister regarding his travels, and then begins to impart the story told by Viktor Frankenstein after picking him up as a castaway. Going beyond simply using this as an entry point for the main plot, the end of the novel loops back to connect the two stories: Viktor’s ambition in creating the monster is paralleled by Walton’s ambition to push forward on his journey, but Walton knows when to stop as his crew begins to fear for their lives on the perilous journey.

This leads in to where the true substance of the horror tale lies—who really is the “monster” in this story? In general, Viktor comes across as the villain, but there is wavering sympathy for both him and his creation woven through the story. The reader is able to feel sympathy for the monster, but it is not totally straightforward, as he clearly does perform evil acts. However, Viktor’s treatment of his creation is the driving force behind the crimes committed—and his seeming inability to recognize his own responsibility for the outcomes tips him further into the side of villain.

Boris’s Thoughts: “As usual, the human botched this one—I bet a cat companion could have solved all of their problems. 2 paws.”