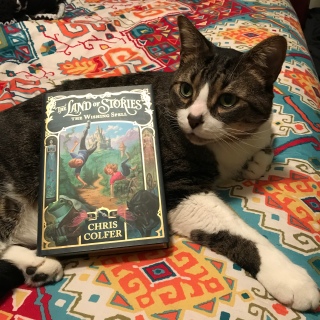 Our first introduction into the Land of Stories begins a bit slowly, but picks up quickly. We get to know Alex and Connor Bailey as twins who are having a hard time adjusting to life after the loss of their father. Alex is quick to retreat from the world, which is the impetus that leads to their accidental discovery of the Fairy Tale World. Upon entering this new world, the twins embark on an adventure to gather the items needed to invoke The Wishing Spell, which they hope will take them back home. Their journey takes them across the various kingdoms of the fairy tale world, where they encounter myriad characters connected to popular stories and nursery rhymes. While most of their difficulties in finding each item are solved fairly easily, there are some twists added in to keep things moving. In the end, the twins learn a bit more about the Fairy Tale World, and their connection to it: their grandmother, the Fairy Godmother.

I enjoyed this one for the most part. The plot is engaging, but the writing does leave a bit to be desired. This is clearly a novel from a first time writer, although I think the fact that it is aimed at a younger audience lessens the negative impact of this. The short, often simple sentences do make it easier to read for those who might be struggling, and the story itself is creative enough to stimulate some imagination in young readers. One of my favorite aspects was seeing the “other side” of some of the fairy tales, in this case the story behind Snow White’s Evil Queen and her obsession with the magic mirror. I liked that this story felt complete in its own right—while we are getting an introduction into the Fairy Tale world, which leaves possibilities open for future adventures, the story of the Wishing Spell is wrapped up by the end of the novel. 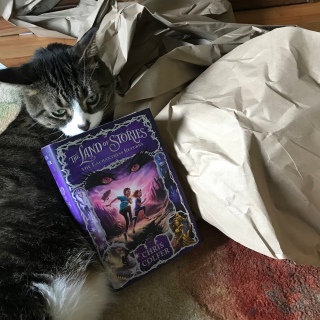 The second installment gives a bit more plot happening in the read world. Alex and Connor discover that their mother has been seeing someone from work, and help him to plan a surprise for her. When she does not arrive home as expected, the twins and Dr. Bob become worried, later discovering that she has been kidnapped and taken to the Fairy Tale World. Although the twins are eager to help, their grandmother leaves them in the care of Mother Goose while she deals with the situation. The twins take advantage of Mother Goose’s troublemaking spirit to sneak into the Fairy Tale World, where they embark on another scavenger hunt type adventure to defeat the Enchantress who has kidnapped their mother and is wreaking havoc across the kingdoms.

As in the Wishing Spell, we get to see a bit of back story on some traditional characters, and even get to see some redemption for Rumpelstiltskin who is more well known as a villain. The story is imaginative, and the writing is tightened up a bit from the first. Colfer is a great storyteller, but still relies a bit heavily on the “telling.” Descriptions of characters and settings are simple enough to invoke imagination, but much of the action and motivations are laid out rather straightforwardly. Like the fist novel, we do get a completed storyline in this book, although the ending itself left the characters in a situation that feels like it needs more.