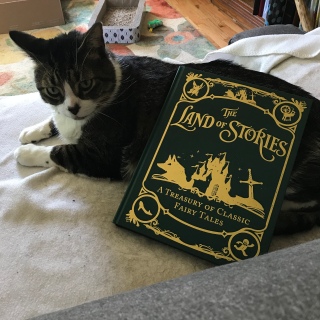 This month on Books On My Cat, Boris and I have decided to do things a little differently. Rather than update on our current reads, we will be featuring a series! I started reading The Land of Stories, written by Chris Colfer, shortly after the first book came out. The series following the adventures of twins Alex and Connor after they accidentally enter the fairy tale world by falling into a book given to them by their grandmother. It consists of six primary novels, as well as several companion books. Throughout the monthly of July, I will post about each of these, as well as three of the companion books, starting with the Land of Stories Treasury. (In addition to the books I will cover, there are two children’s picture books as well as a “behind the scenes” guide created for fans of the series.)

The Land of Stories Treasury is a collection of classic fairy tale adaptations, and ostensibly the book cited in the series as “starting it all.” It includes versions of all of the fairy tales that are referenced throughout the series, as well as a few additional stories and traditional nursery rhymes. There are a few bonuses added at the end, including a “survival guide” for anyone who finds themselves trapped in a fairy tale, as well as brief biographies of the authors—those who created this collection, as well as each of the original authors featured.

I really love this collection—the book itself is beautifully made, and the illustrations are a perfect complement to the stories. While the stories are adaptations and the language is updated a bit, they are for the most part true to the original stories. At least, I should qualify, the stories that I am familiar with true to the original. Despite my love of fairy tales, I freely admit that I have not read all of the original material. Each of the stories is kept brief, told within about 10 pages or fewer including illustrations, which would make this a great book of bedtime stories for kids. I am looking forward to sharing these with by niece and nephews when they get a bit older!