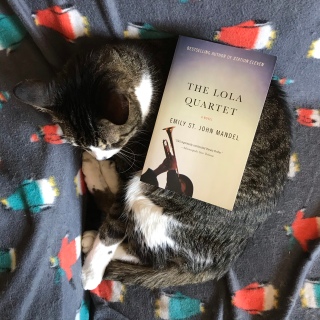 April’s prompt for The Unread Shelf Project was to read your most recently acquired book. Unlike some of the other prompts, this one was fairly easy and straightforward for me! At the beginning of March, I spent a couple days in Ann Arbor for work picked up this book (and one other) at the Literati Bookstore there. Since I read the other book at the end of March, I was left with The Lola Quartet as my clear choice!

This book was super intriguing, and I feel like I was able to really fly through it. The main story starts with Gavin, a reporter in New York whose life seems to be slowly unraveling. A slow downward trend starts to spiral out of control after a trip back to his hometown, when his sister shows him a picture of a girl named Chloe who bears a strong resemblance to their family—and happens to share the last name of his high school girlfriend. Gavin becomes obsessed with the idea of tracking down his old girlfriend Anna, and finding out about his possible daughter. This leads down an intricate rabbit hole of events, with simultaneous storylines: Gavin’s search for Anna in the present, and the story behind Anna’s disappearance beginning back when they were in high school. Anna’s story is twofold: the story of what happened 10 years ago, melding into a personal crisis for her in the present.

This is the second book I have read from Emily St. John Mandel, and I have to say that I love her writing style. While the main plot of the book centers on Gavin, she weaves in multiple story lines to bring the reader along. Throughout the book, the reader seems to be only a step or two ahead of Gavin in piecing together what happened. There is some perspective shifting, telling pieces of the story as it centers around multiple characters at different points in time. At some point, almost every character gets their time in the spotlight, shifting the dynamic of the book so that each feels like a “main character” for a moment. The reader is able to see how the action of each person impacts the others, and ultimately the outcome of the story.

At the end, each of the stories culminate in the present: Gavin tracks down Anna, where he is finally able to put together the final pieces of the puzzle. Anna has been involved in multiple criminal acts, which ultimately led to a death. While Gavin initially views himself as outside of Anna’s problems and the crisis that played out in the present, he realizes that he played an unintentional role: his sister taking the photo of Chloe was the impetus for the string of events. He grapples with what is the “right thing” to do with his knowledge, possibly with the realization that if he had been more upfront about his own actions, he could have altered the outcome.

Boris’s Thoughts: “Too much thinking for me to follow this one. 2 paws.”