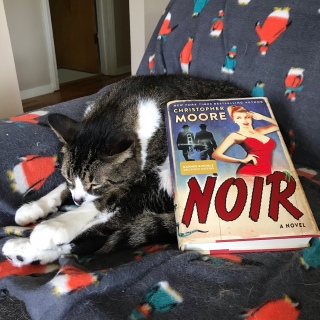 In May, the Unread Shelf Project challenged everyone to read a “backlist” title from their shelves. I had to put a little work into this one, because that is honestly not something that I usually track. I have some obvious new(er) release books, but often buy based on recommendations, so do not always end up with the latest that is out there. While I was debating the best way to choose a title, I received a notification that a book I had pre-ordered awhile back would be out this month—which reminded me that I had never gotten to this author’s previous release! Serendipity.

I am going to start out by admitting a slight bias: I really enjoy this author. His writing has a unique combination of humor, intelligence, and absurdity that I love. I was intrigued by the idea of a noir novel, although I confess that I only really have a general idea of what makes something “noir.” Throughout reading, I felt that this became clearer to me, and I think it was done well—although I’m not familiar with noir literature, this definitely had the feeling of film noir, and I could picture scenes on a movie screen in black and white.

Appropriately, it all begins when a dame walks into a bar. From there, we end up with a fair amount of scene setting: a slew of characters, and several possibilities of where the story many be going. Everyone seems to be “working an angle,” and although there was some general predictability, the pieces come together interestingly. We have the girl who we know is going to be trouble for the leading man Sammy, and then a mystery when she disappears. The story is told from a double perspective, sometimes first person by Sammy and sometimes from the perspective of an unknown narrator. Early on, the second narrator mentions that he is part of the story, but will not reveal himself yet.

The first two thirds or so of this novel were a nice set up to the main plot and problem of the narrative. There were several pieces included that seemed secondary to the plot, but were woven in nicely to the conclusion. It was a bit different from what I usually expect from Moore: while it was definitely his brand of humor, there was less outright absurdity than I have come to expect. Not a bad thing of course, just something a bit different. Of course, Moore came through with just the right touch of lunacy to round things out in the end, including the revelation of the secretive second narrator.

Boris’s Thoughts: “I do not approve of how this book talks about cats. 1 paw.”

Unread Shelf Progress for May