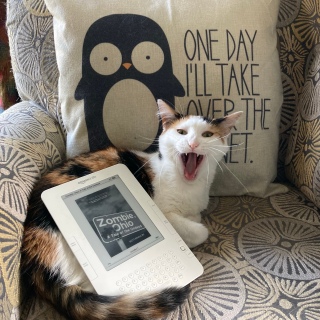 I chose this book in response to a prompt to read a book that was an impulse buy. I have so many books that would probably count as impulse buys—maybe even most of them. To narrow it down a little, I decided to choose a book that I had purchased for my kindle. For several months, I would regularly check the kindle daily deals, and racked up quite a few new books ranging from $0.99 to $2.99. It does not matter if a book had been on your radar if it costs that little, right? Well, I may have taken that just a bit too far. Although it seemed like a good opportunity to try out some new styles and genres, the actual end result was an increasingly out of control to read list.

This was one of those books: a zombie novel. I have never read a real zombie novel until now (and I am not entirely sure this one counts either). I know people who like them, so I thought I would give it a try. This was a slightly different take on the zombie novel, being told from the perspective of one of the zombies—seemingly the only truly sentient one in the bunch. While this twist did make for an interesting story, it was not one that I was really crazy about.

The book starts with the protagonist, Peter, waking up after a car accident. Other than memory loss, he does not feel that he is badly injured, although he can see that the accident looked serious. Peter’s memory loss is used as an opportunity to introduce us to the world and some of the characters—he needs to put the pieces together himself, so this is a natural way to lay things out for the reader. The first section of the book goes on along these lines, and is aptly titled “Revelation.” The book moves on into two more sections with similarly fitting names: Rampage (where Peter embraces life as a zombie) and Redemption (where Peter, although unapologetic, attempts to make up for his behavior in the previous section).

Part of what puts this story on shaky ground with me is the heavy use of two factors: gore and introspection. I realize that gore is to be expected in a novel about zombies. Given the premise of a sentient zombie as narrator, I also understand the need for some introspection. I think the issue comes with the combination: gore may be expected, or even required, in a zombie novel—but it typically does not come with descriptive soliloquy on the joys of licking the brain from the inside of a skull or the satisfying pop of biting into a fresh eyeball.

The introspective nature of our zombie narrator also meant that there were long sections that seemed to plod along, followed by condensed action. The balance felt a little off. Overall, it felt more like a diary of events than a plot driven novel, which did not feel like a good fit with the subject matter.

Minka’s Thoughts: “Silly humans. Everyone knows that cats are the only ones who are going to actually survive the zombie apocalypse. 2 paws.”