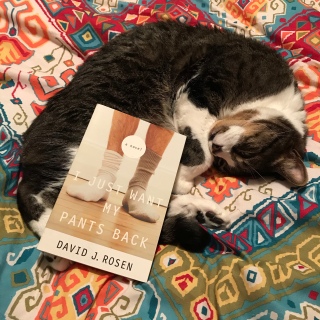 Book: I Just Want My Pants Back by David J. Rosen

An interesting prompt from the Unread Shelf Project had me browsing my shelves to find a book that I forgot where or why I got it. Strangely, I remember the acquisition of nearly all of the 250+ books on my list—it came down to a choice between 4 books! I simply could not choose myself, so I send the list off to a friend, who chose the book with the funniest title.

Unfortunately for those intrigued mostly by the title, the pants only form a small part of the plot, with the line coming early on, in the sixth of 19 chapters. Over the course of the book, the pants become a bit of a metaphor for the stage of life where the protagonist, Jason, finds himself. Jason is a slacker who is slowly working out what it means to grow up. He is introspective enough to know that he seems to be lagging behind as many of his friends take steps into the “next level” of adulthood—relationships, weddings, “real jobs.” Although he can recognize that he should have some kind of plan for the future, he does not really make any efforts. Much of the book centers on his drinking, drug use, and other partying, which eventually turns into a downward spiral.

While it did come through on the humor that the title suggests, much of this fell flat for me. Jason is portrayed as a nice guy, but he’s honestly not really that likable. He does as little as possible to get by, living paycheck to paycheck, but then spends any money he has to binge on drugs and alcohol. He doesn’t seem to take anything in his life seriously: his job, his bills, or his friends, even after being asked to officiate at their wedding. Maybe I never partied quite hard enough to relate. Nothing came as a surprise when things start to fall apart for him, and I didn’t really have much sympathy for his situation. There is a little redemption for Jason at the end, but it almost feels like too little, too late.

I will give some credit to the author on the writing, as it was good enough to keep me reading a story that I was not all that excited about. Extra points for this, because there were a few lines in the first couple chapters that actually had me cringing—one particular when Jason “grabbed a slice and crammed it into [his] eat hole.” Despite this, there was a quality to the writing that pulled me through to the end. And while I am not fully convinced that Jason has redeemed himself to me as a character, at least I found out what happened to the pants.