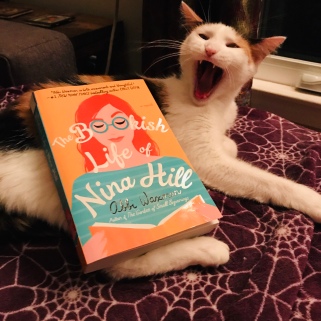 Book: The Bookish Life of Nina Hill by Abbi Waxman

This book was gifted to me earlier this year. My friend told me that she knows it is not the kind of book that I would normally choose for myself, but that it was cute, fun, and light—something that we could all use a little more of this year. I always feel just a slight pressure to move gifted books up on my to read list, but I try to balance that with the commitments I have made to the books already waiting on my shelves. The timing worked out for this one, since I really needed something easy after a couple heavier reads earlier this summer.

Nina works in a bookstore and is comfortable living alone with her cat. She has a routine that she likes to stick to, although perhaps a little more strictly than most. She values the things that she has planned into her life, and is reluctant to make changes. I think she is a character that all true bookworms can relate to on some level, despite her unusual background raised in hotel rooms and then by a nanny in place of her mother.

This is a romantic comedy in the form of a book. Is that its own genre? I am not well versed in this area. I usually think of romantic comedies as movies, and am more familiar with the generic “romance novel.” I am not sure this quite hits the mark there either. So after my rambling, I’m sticking with romantic comedy. The main plot is a dual storyline that fits well with the genre: Nina sees the potential for a relationship with a guy from a rival trivia team, but things get complicated when she also learns that her absent father has died and included her in his will… also connecting her to a complicated network of brothers, sisters, nieces, and nephews that she never knew existed. Things get messy.

It is also a book for bookworms, full of bookish references and other nerdy tidbits. There is definitely an element of predictability, but I felt the author was at least clever and a bit tongue-in-cheek about it: near the middle of the book a character even suggests how the story is going to end, saying “that’s how it happens in the movies.”

Waxman pokes fun at the trendiness of Nina’s neighborhood, full of hipsters and activists, with their competing specialty ice cream shops and quirky stores. It is the sort of joke that I appreciate and make myself—even though I know that it probably applies to me as well! One of the reviews included with my copy of the book refers to Waxman as a “modern day Jane Austen,” which I find very intriguing. Although I have added Austen onto my to read list, I have never actually read any of her work. Drawing a parallel between these authors makes me wonder if it is time for me to give Austen a chance.

Minka’s Thoughts: “Cute, fun, and light—just like me! Also stars a cat! 4 paws!”