This summer, I started reading this young adult series, that I have heard was popular. To be honest, I did not know much about it, but had heard some positive feedback. With so many other things going on this summer, it turned into a bit of an undertaking. I decided that a single post would not be sufficient to address a whole series, but a post for each book also seems just a bit excessive. I’m trying something new here, so let’s see how this goes! 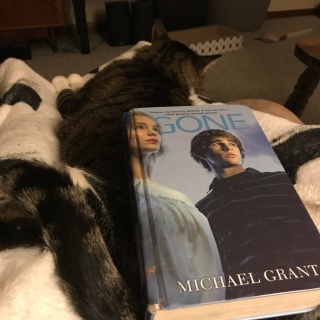 A solid start to the series. One day, in the middle of a high school class, the teacher suddenly disappears. It is soon discovered that it was not just the teacher– everyone over the age of 15 has “poofed.” They soon discover that they have been trapped in some sort of dome, deemed the FAYZ, Fallout Alley Youth Zone, due to their vicinity to the nuclear plant and lack of adults. We get an introduction to most of the main players of the FAYZ here– Sam, Astrid, Caine, Diana, Lana, Edilio, Albert, Quinn, Orc, Drake, and Little Pete. I thought this was done well, in that we get to see pieces of each of them, although it is not quite clear if or why these individuals are important. The plot was fairly straightforward Good vs. Evil, although I appreciated that it definitely showed some gray areas. I thought Grant did a good job in imagining the actions of young people in the absence of adults: most aren’t quite sure what to do, and so they indulge themselves in junk food and laziness; those that recognize that they should be doing something are still not quite sure what that is. I also thought the discovery and development of the mutant powers was done well. Several characters start to show powers, but most seem to be uncertain about them. I also liked that many of the main characters do not have any special power, but still are able to find their place.

The early parts of the book left a bit to be desired as far as writing– I wouldn’t call it bad, but it certainly was not great. I felt like this improved later in the book. I did, however, have some issues with the book in general. The story is pretty intense, and there is some fairly graphic violence. While this does not bother me on principle, I find it a bit mismatched with the Fourth Grade reading level of the book. Also not a fan of the liberal use of the word “retard” in describing Little Pete. While it does address this as problematic, I feel like it could have been toned down quite a bit without losing the intent. 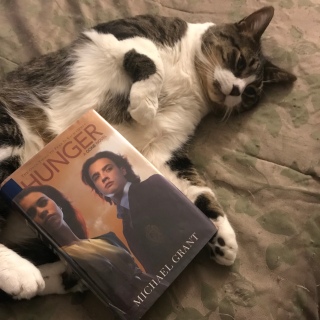 After the final battle in Gone, we have a 3 month time jump to Hunger. The kids in the FAYZ are beginning to realize that things cannot be maintained long term. Food supplies are running short, and the mysterious “Darkness” is starting to create influence in some of the teens. Much of this book felt slower, and a bit less connected than “Gone.” While it did come together in the end, I felt like it took a long time to get there. Sam, as the main character and leader, is in an obvious slump. I can admit this could be realistic, but to me he mostly came off as whiny and annoying.

We do see some good character development in this novel, although I was not a big fan of the female characterization. The three main female characters at this point are Astrid, Diana, and Lana. Astrid and Diana are claimed to be independent and strong women, but really seem to just be sidekicks for their male counterparts. Astrid is somewhat manipulative of Sam, but this is not for some bigger ambition, it’s her survival mechanism, as she does not seem to think she can do so on her own. Diana claims to be independent and in everything for herself, but her actions are primarily as a pawn for Caine. Lana appears to be different– she is strong, she has an attitude, and she is not afraid to take matters into her own hands. However, her encounter with the Darkness in the latter half of the novel leaves her broken and weak.

There is also the introduction of a new character, Zil, whom I find to be extremely unlikable, although interesting. Zil wants to be important, but has always been someone on a lower rung of the social ladder. He wants the prestige of being a leader, but does not really want the responsibility that goes along with leadership. It appears that he is somewhat jealous of those developing powers, but also mostly wants to save face when he is “shown up” by them. He feeds into fears, and seems to bring out the worst in those around him.